The dissent against the Central Board of Film Certification, which had reached a crescendo not so long ago after the Udta Punjab controversy, had calmed down in the recent past with the CBFC conspicuously softening its attitude towards certain prominent filmmakers. However according to a producer the battle is far from over for a filmmaker after his film is released in the theatres. This filmmaker states that the bigger problem a filmmaker faces is in getting his film cleared for satellite telecast, especially for those films that are certified ‘A’, since it is mandatory for filmmakers to get a U/A clearance if their films are to be screened on television. Apparently the CBFC chief had earlier made an exception for the convenience of producers to allow them to exercise self-censorship, before they submitted their films to the CBFC for satellite clearance. However that may be not be the case as is evident from the problem filmmaker Hansal Mehta suffered in getting his film Aligarh cleared for satellite screening.

Six months back prior to the theatrical release of Aligarh, Mehta fought a prolonged battle with the CBFC, starting with the trailer of his film, which was awarded an ‘A’ certificate by the CBFC.  Subsequently he abided by the cuts suggested by CBFC and got his film cleared. However in a new twist, Mehta was recently faced with new problems when he had to screen his film on the satellite media. In a tweet, the filmmaker commented on how pained he felt about all the “drastic cuts” in order to get the U/A certification and several dialogues that were muted out in the film. His tweet read, “When contacted CBFC CEO, Anurag Srivastav, said that it was mandatory for films screened on television to get a U/A clearance. He added that most filmmakers made their own cuts to make the film eligible for the certification. “Apart from that we do suggest a few minor cuts since the film is catering to an entirely different family audience,” he said.

It may be recalled that Aligarh inspired by a real-life incident, revolved around the real life story of a professor in the Aligarh University, who was relegated to a lonely existence after he was held guilty on charges of homosexuality and sacked from his position of Reader and Chair of Modern Indian Languages.

THIS IS WHAT HANSAL MEHTA TWEETED 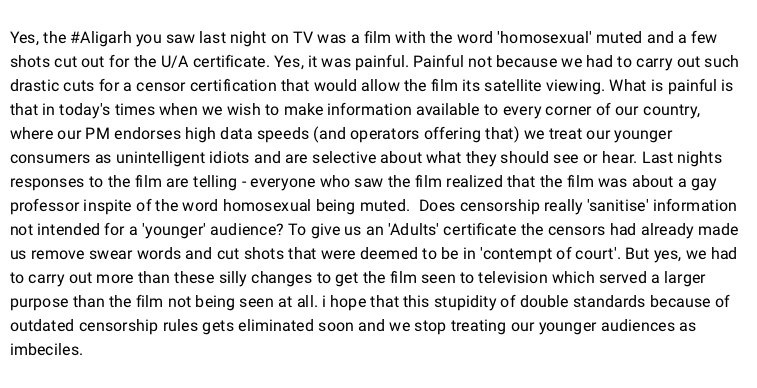